A Norfolk five-piece who are turning heads and going places in the industry, Bad Touch blend together elements of classic, 80’s rock with blues licks to create a powerhouse of melodic rock. Listing Led Zeppelin, Black Crowes and Rival Sons amongst their influences, they are a band who love to turn up the volume, but also infuse their songs with subtlety and melody.

It bodes well for new album ‘Halfway Home’, due out at the end of April, and we got a taste of their style when we played their lead single ‘Wise Water’ on the show last week

The album has been a long time coming for Bad Touch as it’s been 5 years since their inception. Having started with cover songs, their set has evolved into their own material. Which they have taken the time to hone and mould into their own style. Patiently working on their own material before launching into a debut album, the result is truly impressive.

Bad Touch are currently supporting The Answer on their UK tour and prior to them taking the stage at Chinnery’s, Southend-On-Sea, last week, I sat down with all five members of the band and began by asking about the length of time it’s taken them to release their debut album.

MJ: ‘Half Way Home’ is your debut album. It’s been a long time coming. We played the lead single ‘Wise Water’ on the show last week and I can tell you that it went down really well with the listeners.

MJ: There’s a lot of people that have seen you fellas play. They like your music and we get requests to play Bad Touch. Seeks, how’s that sound to you with the reaction that you’re getting from the album?

Seeks: It’s lovely. It’s great that people are asking for us to play our own music. It’s fantastic. I mean I don’t know how anyone else would feel about it, but just for people wanting our music being played is the whole point we do it, you know?

MJ: Let me turn to Bailey. What is it you’re enjoying most about this album?

Bailey: I’m loving it. We spent ages writing it, recording it. And it’s now actually out there for people to listen to. That’s nice to actually hear them say that they’re enjoying it as well. 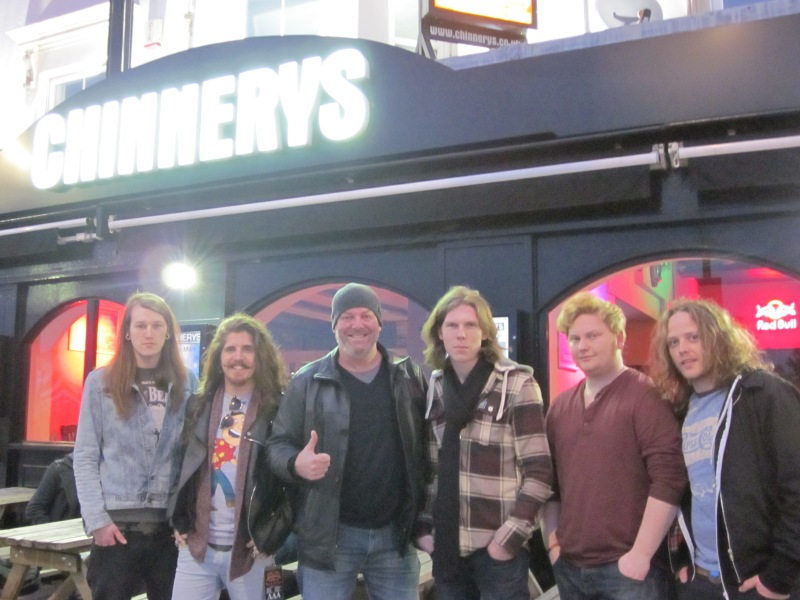 MJ: George, tell us about the songwriting on this album. Have you all taken a share of responsibilities?

George: We sort of write each song in a different way. Like on some of them one person might have written 90% of it, but other songs you might just get a guitar riff and then we all sort of collaborated together. But, in general, it’s hugely more or less one person has the germ idea, and then we all take it away, and then we all write our own parts to it. And lyrics can be done in one night or one year, you know?

Stevie: That’s one of the things I love about being in Bad Touch the best is getting everyone else’s ideas and going, “Wow. That sounds awesome. I’d have never have thought of that.”

MJ: Rob, you’re obviously testing out the new songs on this tour?

Rob: On the set at the moment is all the new stuff from the album. There’s no sort of old tracks from the old EP. But, we’ve got a couple more experimental tracks on the album where we sort of do our thing where it goes on for a little while. They’re blues-y, slower. So, we try to keep it more upbeat with the set that we’re doing. But, obviously, we’ve got half an hour set, so we sort of want to get on there, do our thing, and then come off. So, it’s going well at the moment. The Answer guys, they sort of pick the particular tracks they like, and they’ve been really cool about it. So, it’s all going well.

MJ: And the feedback, Stevie, on this tour with The Answer has been really positive.

Stevie: Yeah. It’s lovely to have all these people saying how much they’re enjoying it, both the album and the live performances and stuff like that. I mean, but we take criticism where criticism is due just like we take credit. We’re quite aware that we’re not breaking any sort of boundaries with regards to musical experimentation. We’re quite happy doing what we do and it being feel good, rock music, you know? I think too many times people are caught up in it and the brains behind it and think, “Oh, we’ve got to be new. We’ve got to…” It’s like, if it sounds good and you enjoy playing it, then that’s all that matters. And, if people enjoy it, then even better, you know?

MJ: You seem to have found your feet with this album.

Stevie: Oh, that’s very kind of you. No, we definitely wanted to make sure that you say that. The thing with this album, which I’m most happy is that it sounds like us. If you came to see us and bought the album, you wouldn’t get the album home and go, “This doesn’t sound like them.” It captures us or what it is to be Bad Touch, you know?

George: In the album, we’ve tried things on the album that is different, but that’s the whole point of an album. But, it’s not like we’ve gone synthesizers, and electric drum kits, and things. It’s basically a five-piece rock band doing what they do, you know? And we did everything on the album.

MJ: Well, we’re going to leave it here because you’re off to sound check. Thanks so much for chatting with us on The Classic Rock Show. Last few words from you guys for the fans out there?

Seeks: A big thank you everyone and to your listeners for the support.

Rob: Yeah. Thanks a lot everyone. You’ve been great.

George: Yeah. Keep coming to the gigs and keep rocking!

Bailey: If you haven’t heard the album yet, we hope you enjoy it.

Stevie: Just want to say thanks for listening and, even more so, thanks for wanting us. And thanks too to The Classic Rock Show for putting us up.