Now taking your requests until Midnight on Monday!

‘The Classic Rock Show’ is back with another three hours of playing what you wanna hear; your requests and a whole lot more great sounding music on Thursday night from 7pm (UK time).

The ‘Request-line’ is now open! We’ll be taking requests up until Midnight on Monday 25th

The last two weeks you’ve asked for some great music to be played on the show:- 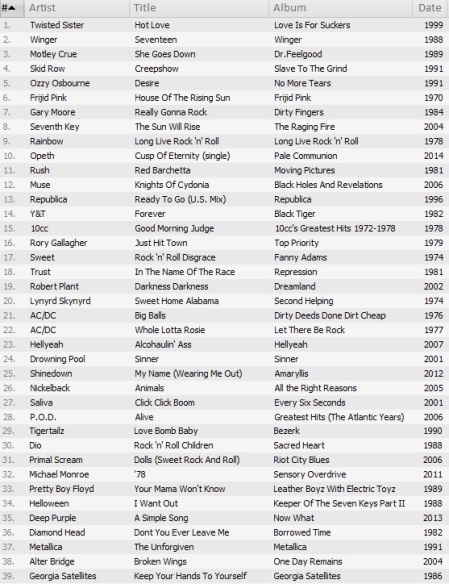 As well as the weekly ‘Roll Call’ feature, during the show we’ll be announcing two dates to put in your diary:-

1. The next Classic Rock Show ’80s Special’. Part 2 (in our series of 10 shows that takes us year by year through the Rock decade that totally rocked) will be 1981! Journey, Van Halen, Foreigner, AC/DC, Iron Maiden, Y&T, Motley Crue, Ozzy Osbourne, Def Leppard, REO Speedwagon, Styx…we could carry on, but that’s just a taster.

2. A very good friend of TCRS, ex-Hawkwind bassist Mr Alan Davey, will be joining us. As well as sharing some of his experiences on the road and in the studio, you’ll be the first to hear tracks from two separate album projects that are set for release in 2015. All-in-all, it’ll be packed with some great music and memories.

2 thoughts on “Now taking your requests until Midnight on Monday!”