It’s fair to say that UK quartet Skarlett Riot don’t lack confidence. As anyone that’s had the pleasure of witnessing this young four-piece live will attest to.

In an already jam-packed career Skarlett Riot have wowed audiences at Download (earning a 4K live review from Kerrang!) and Bloodstock, and have shared stages across the UK with the likes of Wednesday 13, D-A-D, Reckless Love, Heaven’s Basement, Periphery, Firewind, Black Spiders, Edguy, Taking Dawn, L.A Guns, Glamour Of The Kill, Crashdiet, Vains Of Jenna, Deaf Havana, Francesqa plus many more, including the prestigious Reading and Leeds festivals to their live resume. 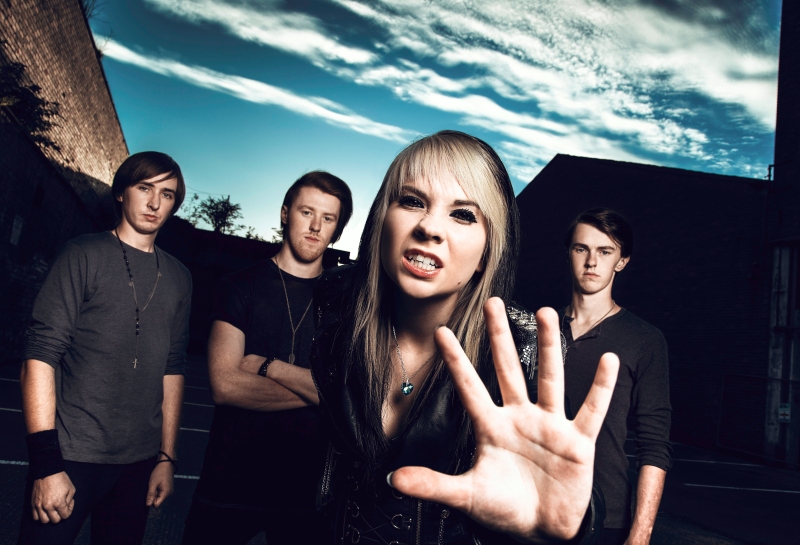 The band’s debut EP, the critically acclaimed “Villain”, set the benchmark high and led to glowing praise within the rock community. In 2013, they released their first album ‘Tear Me Down’, once again, it was received well by press and fans. Now, they’re about to release another EP entitle ‘We Are The Brave’, a collection of songs with big riffs, and strong themes.

I recently got talking to Skarlett, the lead singer, about the EP and I began by asking her about the new video which has been circulating on Scuzz TV.

MJ: Skarlett…welcome to The Classic Rock Show. How are you doing?

MJ: Busy time for you all. You’ve a new video out for the song “Rising”.  It’s a track off your We Are The Brave EP which is out on February the 16th. Tell us about the video.

S: Basically, we filmed it about six months ago. And we wanted like something silhouette-y, so you can only see the band at the end of the video. So it’s all blacked out, and the idea of it is the song is called “Rising,” obviously, and the lyrics are about getting revenge on someone, saying you’ll be back again. Having power in the lyrics. So we wanted to keep it all silhouetted out, and then at the end have the world kind of exposed so it looks more powerful, at the end, I guess. So we just got it on Scuzz TV as well which we’re really excited about too.

MJ: How long has the We Are The Brave EP been in the making?

S: I would say about a year. We’ve just been writing as much as possible since the Turn Down album in 2013. We had been thinking of doing a second album, but we said no, let’s put the best of what we’ve written so far into one EP. So we wrote about 10 songs and we picked about five to go on the EP, which has brought us up until now, really.

MJ: We’ve talked about “Rising”, but as you mentioned there’s five tracks on the EP: “Divide Us,” “Cascade,” “Wake Up,” and “Are You Alive?” Take us through each of those.

S: All the tracks, apart from “Rising” are about living life to the full and not wasting any time. Like “Wake Up”, “Are you Alive?” and “Cascade”. The lyrics to “Cascade” are about time slipping through the hourglass and having no time to spare. You know, it’s the sand in the hourglass is never going to stop, just like time itself. So, the back message is live your life and enjoy it and don’t listen to what anyone else says…just do what makes you happy.

MJ: Last year, of course you were seen at a number of festivals and on tours. How is 2015 looking for Skarlett Riot?

S: Yeah, we’re continuing to raise our profile and get as many fans and people knowing the name as possible. We’re touring with Gus G in February and then we’ve a few headline dates. We’ve got a sold out show at the O2 Academy Islington with Kamelot and Gus G in March. We’ll be with Slam Cartel in April…and a couple festivals here and there…so far, so good.

MJ: Going back to the EP, the front of the EP is a depiction of a lion’s head, which has been hand-drawn. Is that Helen Hebenton‘s work again?

S: Yeah, that’s right. We’ve known Helen for quite a while and worked with her before, way back to the Villian EP cover and the Villain t-shirts. She’s also responsible for designing the band’s new logo. We wanted the style of the new EP cover have a vintage look, with black and gray artwork. Helen was a perfect choice. She did a great job with the EP, the cover. It was largely her idea to use the lion it would best represent power and strength. I think it has come across really well.

MJ: You’re obviously going to be pushing the tracks on the EP in your ‘live’ set?

S: Yeah, we’ve been practicing like crazy. It’ll be like three or four of the new EP tracks and then we’ll be mixing it in with a couple of the Tear Me Down tracks. So, they’ll be a lot of new material in there, but we’ll be putting in a couple of what we think are the best tracks from the Tear Me Down album as well.

MJ: Any plans to release an album, or more videos on the back of this EP?

S: Yeah, I think we’ll be releasing a couple more singles off of the back of the EP. We wanted this EP to last the full year. But in between that we’ll be writing some more while the EP is circulating. We’re hoping to be writing an album, too, but we’re not sure when that will be released yet. For the moment, we all feel that we need to have the right material in place first. Make sure it’s 100% and that we’re all 100% happy with it.

MJ: Any last little things that you want to get over to the fans?

S: Just thank you very much for supporting us. We had such a great response to the pre-order for We Are The Brave. You can order it on www.skarlettriot.bigcartel.com. Yeah, thanks for the support and we’ll see you on the road!

NEWS: Skarlett Riot return with riff-packed ‘We Are The Brave’

Following on from their hugely successful debut album ‘Tear Me Down’, young UK four piece Skarlett Riot return with the riff-packed, hook laden ‘We Are The Brave’. Due for release February 16th, 2015, ‘We Are The Brave’ is a hard hitting, collection of songs; still packed with the memorable choruses and outstanding vocals the fans have come to expect.

Prior to ‘We Are The Brave’ the band release the powerful single ‘Rising’ on January 19th. The band have filmed a video clip accompany the release which will be hitting the screens via Scuzz and Kerrang TV in the New Year. The band released a lyric video for the stand-alone single ‘House Of Cards’ (check it out below).

The band, Skarlett, Danny, Martin & Luke, will be hitting the road in 2015 in support of ‘We Are The Brave’, and have recently confirmed they will be touring with Ozzy Osbourne/Firewind guitarist Gus G and will be opening for the legendary Kamelot at their special ‘one night only’ show in London.

‘The Classic Rock Show’ will be hooking up with the Skarlett Riot in the New Year.