From 7pm tonight (BST) / 2pm (EDT) / 11am (PDT) ‘The Classic Rock Show’ fills three hours with some classic cuts from bands who released albums and singles from around this week ‘back in the day’.

Apocalyptica is a Finnish cello-rock band from Helsinki, formed in 1993. The band is composed of classically trained cellists Eicca Toppinen, Paavo Lötjönen, Perttu Kivilaakso and drummer Mikko Sirén. Their music borrows elements from a wide variety of genres including classical music, metal, world, folk and progressive rock. They have sold over four million albums to date. The band’s recent albums included both instrumentals and collaborations with various singers, such as Corey Taylor, Adam Gontier and Cristina Scabbia.

Apocalyptica have recently recruited an official vocalist, Franky Perez, who was part of Scars on Broadway, Pusher Jones and appeared on Slash’s first solo record.

The band will release their eighth studio album ‘Shadowmaker’ in April through Eleven Seven Music. We have had a taste of what’s to come as a lyric video of the album’s title track has been released. They’ll be releasing a single, ‘Cold Blood’, mid-Feb along with a video directed by Lisa Mann who has directed a number of Apocalyptica videos.

I got to speak with Perttu Kivilaakso the other day after they had shot a new video for a future single release ‘Cold Blood’ out mid-February.

MJ: Bands such as Electric Light Orchestra, Eloy, Genesis, Emerson Lake & Palmer, The Moody Blues, Pink Floyd, King Crimson, Sky, etc., have all used heavily orchestrated arrangements within their work and have been cited as having influenced many an artist/band both then and still do so to this day. What music being created today influences you and how has it manifested itself in the music you have written and recorded?

PK: The band have a large taste when it comes to all kinds of music. We cellists naturally grew amongst classical music, symphony orchestras. I personally have loved opera, especially 19th century Italian, my whole life. I would say that everything we have listened to and loved has had an influence to what we are doing. I still listen to opera and bands like Arch Enemy, Slipknot, as well as Muse, Ellie Goulding, Owl City.

MJ: Apocalyptica perform live shows the world over, and to a heavy schedule. We all think that guitars, keyboards and drums are pretty robust instruments these days. How do the Cellos bear up to the stresses and strains of travel by air/sea?

PK: We have such a great flight cases for the cellos that ever since years back when we started using them, none of the instruments has been destroyed in cargo.

MJ: Do you have any tips on how to keep them in shape and what do you need to look out for?

PK: Cellos are very sensitive instruments and usually need careful handling,keeping them off from heat/cold etc…BUT we are not really a good example for that, so if you watch Apocalyptica banging them cellos, try to avoid all that and you’ll do just fine! [laughs]

MJ: Your new album, entitled ‘Shadowmaker’, was recorded in Nashville, TN; not somewhere you’d instantly recognise as a haven for Symphonic Rock bands. Why there?

PK: We went to Nashville just because of Mr Raskulinecz’s studio. We had a clear vision how we would want the album to sound and approach and our choice for producer was very obvious for us.

MJ: As you have mentioned, Nick Raskulinecz has produced the album. He’s previously worked with the likes of Rush, Alice In Chains, Evanescence, Mastodon and Foo Fighters to name but a few. What was it like working with him and his team?

PK: Nick is definitely one of the most inspiring people I’ve ever worked with in the business. He was able to help us find an entire new level for our group, in ways of playing as well as our thinking. This time we were better prepared for the recordings than ever, after months of rehearsing and pre-production, practicing and yet more arranging and jamming together. So, when it came to the final recordings, everything was clear. And Nick concentrated to achieve magical performances from all of us.

MJ: Can you share any instances that occurred in the studio where he got you to think differently about your approach, for example, to a certain section of work?

PK: He had a big impact in how we set out our arrangements. We discovered many cool progressive and brave solutions. In fact our motto for this recordings was “Be Brave”.

MJ: How soon into the recordings was it before you came to realise that you really had made the right choice with Nick as your producer?

PK: I think we all realised it already in pre-production, We had a strong vision for the album, but already from the start Nick encouraged us to follow our hearts and not to worry about anything else, like pressures from outside our band. So this time it is easy to say that the album is absolutely as we felt while composing, arranging and recording. Nick was able to set us on fire!

MJ: How would you describe the album?

PK: Shadowmaker is a strong journey, a story that brings you through various emotions. The album is somehow more serious, it is also totally a “band record”…we wanted to have just one voice, one vocalist, to bind all…better together.

MJ: You’ve already given us a taste of what’s to come by releasing a lyric video. Tell us about how the title track ‘Shadowmaker’ came about?

PK: The Shadowmaker song was so determined; one of the most powerful tracks we did that we wanted it to be album title as well. It is a cool example of the musical variety we have, from sweet vocal choruses to dark metal, pure cello sounds collapsing with horrific distortions. That pretty much sums up what it is to be “Apocalyptica”.

MJ: As on previous albums, you’ve chosen to work with other musicians. How did your collaboration with Franky Perez come about?

PK: We really wanted to concentrate on our band this time around and not to focus anymore with all the “featuring stuff” etc. We wanted to bring in a vocalist who is able to join us for all tours ahead; one guy to sing the album and perform with us ‘live’.

We had quite a big closed audition to find a person who would fit in perfectly. I have to say that we are more than happy having Franky, as besides him being an amazing vocalist, so versatile, handsome and stuff, he is also the nicest guy on earth. 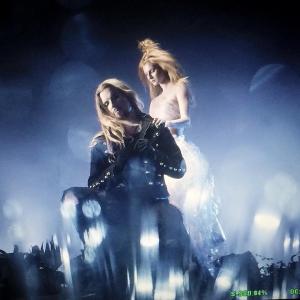 MJ: Which songs from the album will you look to play ‘live’ and do you have a personal favourite?

PK: Of course we’d like to play most of them, if not all ‘live’. I think the whole album is just so cool. As for a personal favourite; I have a close relation with ‘Dead Man’s Eyes’, and that will be so emotional to play ‘live’ as well. I feel like I sacrificed a part of my soul while composing those melodies and making them come alive!

MJ: We’ve come to the end of our chat. It’s clear to me listening to you that the recording of this album and the prospect of what lies ahead for Apocalyptica, has had a significant impact on both you and the rest of the band. I’m curious to learn, therefore, what have you taken from this experience?

PK: Personally, I once again found out few more tricks to play cello differently than I’ve ever done before. Some ultimately fast passages which felt impossible at the time [laughs].  This experience has made me love music even more. I am so excited for the band, for the release of Shadowmaker, all the forthcoming tours, my other musical projects and life in general!

You would have to be brain-dead not to have picked up on Perttu’s enthusiasm. He certainly left me in no doubt whatsoever that the band are a strong outfit. What they’ve seemingly accomplished with this new album is something more than just a great piece of work, of which they’re rightly proud…I sense it’s a new beginning.

The album ‘Shadowmaker’ is set for release in April 2015…and we can’t wait to hear it!

The lead single to the album ’30 Years To Life’ as well as the album’s title track, have received huge radio support from pretty much every rock radio station known to mankind, including independent local radio.

‘World on Fire’ contains a colossal 17 tracks and is Slash’s third solo album, the previous two being self-titled, if you remember, and ‘Apocalyptic Love’.

You can listen to the world’s most iconic guitarist talk about it right here!

The hardest working man in the business brings his unique brand of rock ‘n’ f’n roll to UK arenas this November/December, with all venues on the verge of selling out, be sure to get yours quick!

Here’s the playlist from last night’s 4-hour show and what a belter it was!!

Last night’s show proved one of the most enjoyable in recent weeks; as well as playing around 31 requests (44 tracks were played in total), there was a huuuuge amount of interaction in our Facebook Group www.facebook.com/groups/theclassicrockshow and to top it all, we welcomed in six new listeners!!

I’ll soon be uploading the show recording onto Mixcloud, so keep an eye out for that.

Have a great weekend….and I’ll catch up with you soon!