Slam Cartel  are Gary Moffat (vocals), Terence Warville (guitar), Damian J Fawsett (lead guitar), Marc Neudeck (bass guitar), Steve Campkin (drums). The band have been busy in the recording and rehearsal studios of late in readiness to accommodate a few of the new songs ahead of some up and coming shows. We took the opportunity between rehearsals to grab a few words with their lead guitarist, Damo Fawsett, and ask about the new music.

Damo: Yes, we’ve got a new single ‘Storm Seasoned’, we’ve just finished all the final recording on it now, just put the last bits down. It’s got to be mixed and mastered and then it will be ready to go.

TCRS: How to the mixes sound so far?

Damo: Yeah, it sounds great, it’s still pretty much the Slam Cartel you know. Still in the same vein, so the die-hard fans won’t be disappointed. The people that have heard it, the rough, the lucky few that we’ve played it to have said ‘Storm Seasoned’ is a beautiful song.

Damo: It’s a love story. It’s Terry’s lyrics, so you know the guy is a poet anyway, so he writes great lyrics and he’s probably the best one to explain the story of the song. Everyone has got their own interpretation of it and I don’t want to do him an injustice by telling him my interpretation of it, but no it’s got a great vintage feel to it as well, it’s like, I’m not going to spoil it because I want people to be surprised, but it’s kind of got an early Who, Floyd type vibe to it, you know it’s a beautiful song with a kind of dark vibe. 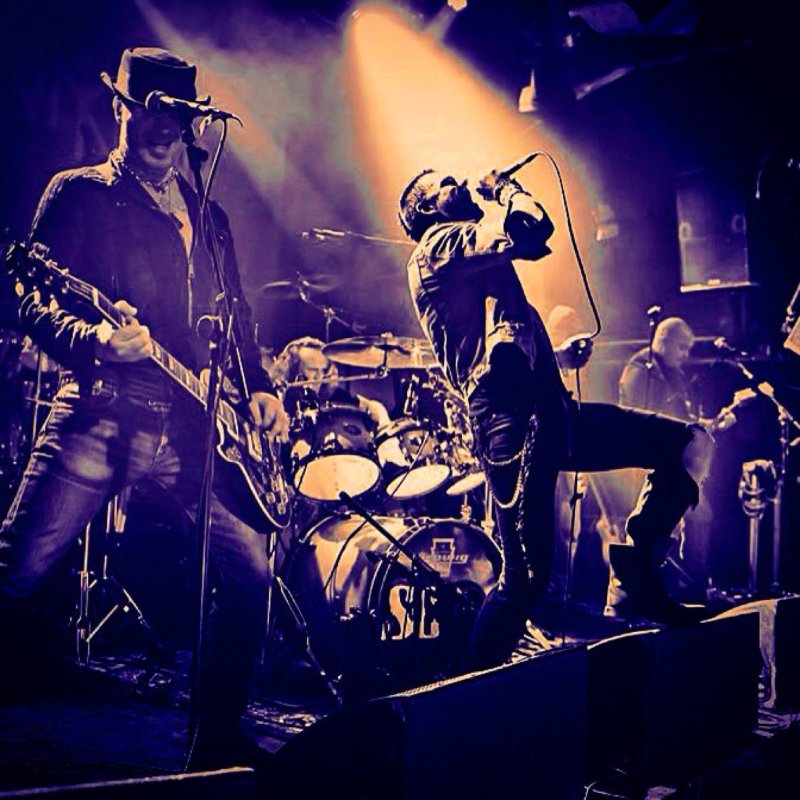 TCRS: You’re one of the new boys in Slam Cartel.

Damo: I’m the last one in, yeah so hopefully I won’t be “last one in, first out” [laughs]. I’ve been in the band probably about 18 months now and I’ve loved every minute of it. I’ve had to prove my worth, you know they don’t just take any old crap, I have to work hard to stay in the band. It’s great we’re all a good bunch of mates, we all get a long, we socialize as well, it’s quite unusual in bands these day to get along and have a good time together and we still do and that’s what it’s all about is enjoying yourself, enjoying the music you’re playing.

TCRS: Guitar-wise, what is your go-to guitar in the studio and does that find its way on stage?

Damo: For years and years I use to hate Fender Telecasters.  I just thought they were just a country and western guitar. It wasn’t until I saw a local guy that I know, a session guitarist Jeff Whitehorn, who has played for Paul Rogers and Elkie Brooks, I was chatting to him at a gig and he showed me this hollow bodied telecaster and I was really turned off by the idea of a hollow body Telecaster. You know the fact that they feedback and it was sounding like a Telecaster, he played it and it was amazing.

Damo: Yeah. Jeff can make anything sound good, so I got a hold of one made by a company called ‘Fret King’, and played it and I use it for everything. I’ve got loads of other guitars, but the Fret King ‘Country Squire Semitone’. For guitarists that want to know what the spec is it has two humbuckers on it, and you’ve got the ability to turn it into single coils like an old style Telecaster. I’ve used in the studio with Slam Cartel recently and I use it live on most of Slam Cartel’s stuff as well. I’m endorsed by Fret King and Vintage. Vintage used to be a budget range and now they’re producing real high-end guitars and they’ve got Les Paul style that I use as well and its better than most guitars I’ve ever played including the Gibson Les Paul.

TCRS: And you’re running them through Marshall stacks?

Damo: I use to use Marshall years ago and then I went off and tried all sorts of different amps and a lot of these other amps sound great you know, Engl, Black Star, whatever, all these different things. I used a Cornford for years which sounded great as well, but there’s only one that will work in Slam Cartel and that is a Marshall. You just need that grit and the sleaze and only a Marshall can do that.

TCRS: You’ve got some more gigs lined up as part of this tour.

Damo: Last year, we talked about two rounds of gigs, you know we did a lot in the first part of the tour earlier in the year and then later in the year, from the summer on through the winter, we do like a second bout of the tour. We just announced a hand full of dates for the second part of the tour, there’s quite a few more coming in and hopefully we’ll have a few nice big support slots as well like we did last year.

TCRS: So the singles, not quite in the can yet but very close to? 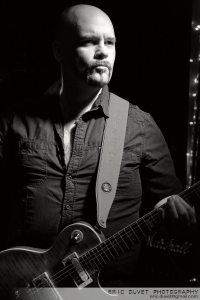 TCRS: Tour and dates gets lined up, what else can we expect from Slam Cartel this year? Are you likely to do some more recording or is that already in your back pocket so to speak?

Damo: Yeah, there’s no doubt we’ll go back in the studio, we’re as good in the studio as well as we are out on stage… you know if the influence is there and the will is there to keep writing, then we’ll keep doing it. We’ve got a good team we work with, we use George De Angelis (Producer) and Mandy Parnell masters our stuff as well, so you know we’ve got the right people to do the gold dusting as well.

TCRS: There may be a few people reading this who might not make the connection with the two names you’ve just mentioned and what they have probably heared on the radio.

Damo: Yeah the best way of explaining it all, the best advice I could give to our producer and the lady that a masters our recordings is just to Google them because I could go on for hours about this stuff but George De Angelis, great producer, I probably wouldn’t like to work with anyone else as a producer now, you know the guy is an absolute genius.

TCRS: He used to be Trevor Horn’s Engineer?

Damo: Trevor Horn, yeah that’s right. He knows his stuff. We’ve Mandy Parnell, she’s received a Grammy nomination. She gold dusts everything and she’s won countless awards for what she does and you probably couldn’t get better than her to be honest.

TCRS: Plenty of stuff coming up for Slam Cartel, then. Potentially an EP at some point?

Damo: Yeah we’ve got a few options, we can keep putting out singles if the demand is there. It’s something that we need to all sit down and discuss really, the way forward, we might go away tail end of the year and start writing an album. That’s the good thing about writing music and releasing music these days, if you’ve got the backing behind you and the financing, you can go and do it, but it’s something we need to look at. We may put all the singles together on an EP and put out a five-track EP later in the year or we might just keep releasing a few more singles, but there’s probably going to be a video as well. We’ve got some ridiculous ideas (Laughing). We haven’t approached anyone yet about doing a video, but we have sat and discussed it and some ideas have been muted, so needless to say the video will be as epic as the new single, it may be ridiculously epic but it will be great. We did a little live studio session a few months back at a local studio. They did a little video for us, we recorded ‘Hypnotize’ live and they recorded us doing it and they sort of synced the track and video together and it worked quite well. I’m quite proud of it, but I think you can’t really beat a good music video. Yeah, I mean basically just keep an eye on Slam Cartel on Twitter and Facebook, there’s always stuff going on and we’re always full of surprises as well, I mean a lot of stuff goes on behind the scenes, we’re always talking to people and getting offers on things and we now this is something quite high profile I’m discussing at the moment, so it’s really just keep an eye on us.